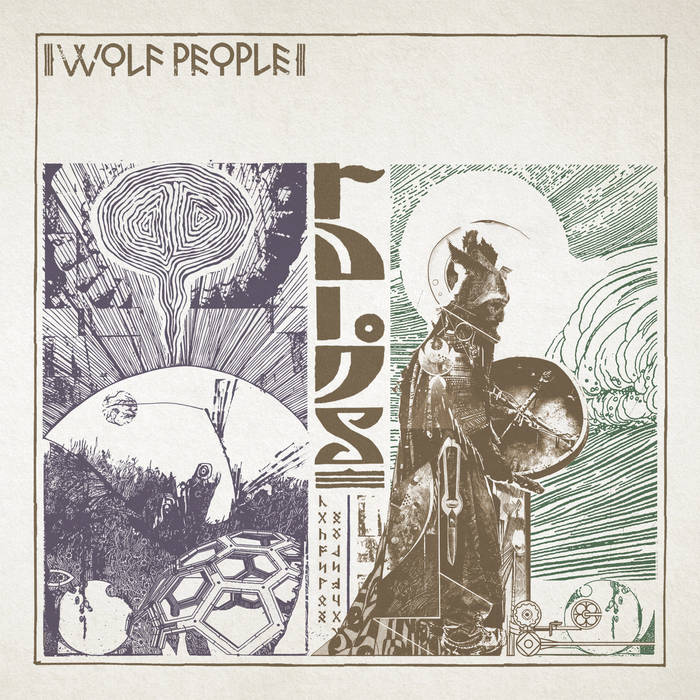 esko997 Wolf People have cultivated a truly unique sonic experience in Ruins. Somewhere between folk, stoner metal and psychedelic rock, this album somehow wouldn't feel out of place performed at a medieval theater or at a crunchy modern music festival; I wouldn't be surprised to learn a lute had been played on this album. Seamlessly weaving between psychedelic folk and stonery rock, I'd highly recommend Ruins for psych/folk fans looking for a heady narrative experience. Favorite track: Night Witch.

Jason Bartlett So I listened to this album, and then bought their entire discography. You're not going to find another band like this anytime soon. I just hope they tour in my area, I would absolutely buy tickets to that concert. Favorite track: Night Witch.

Helio Arcanaphus This album sounds like it should be the soundtrack to a 70s novel with a title like Warriors At The Edge of Forever.

This is a recommendation. It's brilliant. Favorite track: Night Witch.
more...

A.D. 2016 and England is in flux. This bastard island is divided, shot through with doubt and self-loathing, ruled by the feverish egos of passing power hungry-dilettantes, two-bit aristocrats and smiling psychopaths. Swathes of the country have been sold off, paved over, neon-lit. England is at war with itself and this time the enemy is in the mirror. The people require a new narrative, a new soundtrack. They need to feel the pull of history and navigate a new path through the morass of misinformation.

Emerging from the woodlands, riverbanks and the dales like the grizzled ‘green men’ resistance fighters of the post-Norman invasions, the spirit-raising purveyors of pagan folk psyche prog Wolf People return to provide exactly just that.

Ruins is their new album, and its over-riding theme is that of nature reclaiming the land. The transcendence of life over politics, plants over people. It asks: where are we going and what comes next? If culture is history’s narration, then Wolf People are custodians and conduits; electrified sages, if you will. Through them runs a time-line of a nation rising from bloody glory to existentialist confusion. Yet within Ruins, their album proper, lies a spirit of hope too, it is a reminder that society is no match for the mighty power of music and nature working in perfect symbiosis. Wolf People are time travellers, their tools mythology, history, hauntology, big riffs, bigger beats, electricity.

“It’s not a concept album, but a lot of the songs consider what the world might be like without humans,” says singer/guitarist Jack Sharp. “The title refers to the ruins of civilisation. I suppose like many people – especially now – we’re constantly veering towards complete frustration with the human race one moment, and celebrating all the positive things about humanity the next. The aim was to try and portray that without sounding too trite or preachy.”
Lyrically Ruins imagines how the planet might appear when society has finally fallen to dust and ash, and the creeping vines and nettles have reclaimed the land. It is the product of letting go of conceit, contrivance and, indeed, a career plan. For following the release of 2013’s acclaimed Fain, and a tough year for all concerned, frontman Jack Sharp considered giving up. Out of this doubt came a wellspring of new ideas that could only be recorded by Wolf People. The universe had spoken. It was written in the runes. Their best album was yet to come. And it did. It is Ruins.

Such deep-drilling is evident on Ruins’ opener ‘Ninth Night’, whose lyrics are an incantation once whispered by 18th century burglars and vagabonds while toting the famed Hand of Glory – the stolen hand of a hanged man, dipped in wax (or alternatively a candle made from human fat). Once lit it was believed to lull victims into a deep sleep. “Let those who rest more deeply sleep,” sings Jack Sharp. “Let those awake their vigils keep / Oh hand of glory shed thy light / Direct us to our spoils tonight...” Then there’s the album’s contemplative centre-piece ‘Kingfisher’ (and its subsequent reprisals), inspired by Sharp’s chance sighting of a kingfisher darting unseen past a courting couple: “I saw a kingfisher fly just feet from where you sat / It didn’t even catch your eye / What am I meant to make of that?”

Influences upon Ruins come in all shapes, size, contours and hues: the discovery of proto Sabbath/Zeppelin Scottish band Iron Claw (“the lost pioneers of heavy metal” enthuses guitarist Joe Hollick), the lesser known landscapes of rural Bedfordshire, backstage Taekwondo stretches (bassist Dan Davies is an instructor), Scandinavian psychedelia, fleeting rural epiphanies, Dungen, Trees, Peter Green’s Fleetwood Mac, a group holiday on a remote Finnish island, the head of their label flipping out after seeing them play in Bloomington, Indiana and insisting it was time they made their Back In Black....

Wolf People began life in the ancient Bedfordshire village of Clophill, a place recorded in the Domesday Book of 1086 as Clopelle (translation: ‘tree stump’), on land owned by a Norman knight, Nigel d'Aubigny. By the time future frontman Jack Sharp and drummer Tom Watt met there, Britpop, hip-hop and fresh fruit had replaced pillaging, chain mail and scrofula, but the mission not dissimilar to that of their forefathers: to embark upon crusades to foreign shores. This they did via a variety of bands, projects, sample-gathering sessions and home recordings that lead to the current formation of Wolf People in 2007. “Jack and I were endlessly compiling all these loops and drum breaks,” remembers Watt. “And we just thought – hang on – why not just make this music ourselves?”

That early love of hip-hop, funk and soul records may not be evident in Wolf People’s lupine appearance, but it’s there in the rhythmic swing that powers them, Watt’s drum patterns as much influenced by the dark beats of, say, Wu Tang Clan, as any tub-thumbing rockist bozos of yore. And while Wolf People create folk-rock of a distinctly hirsute and amplified bent - what comedian and fan Stewart Lee famously called “peat bog superfuzz sphagnum moss sludge”- there lies at their heart a duelling guitar interplay reminiscent of Marquee Moon-era Television, that place where textured cerebral exploratory prog had its edges refined by something more angular.

Recorded in Devon, Isle Of Wight and London, Ruins is their most direct and instinctive work yet, simultaneously reaching back into a fecund past to tell us who we are today, while harnessing the power of modern technology and ideas to ponder unknown futures. “People who complain that the internet has killed music are missing the point,” says guitarist Joe Hollick, who lives in the Lancashire market town of Barnoldswick (named in the Domesday book as Bernulfsuuic, translation: ‘Bernulf’s dairy farm’). “We’re not Fairport Convention mining Cecil Sharpe’s archives: it’s all at our fingertips now. For from being stuck in the dark ages, there’s a weight of amazing cultural material behind us to dive into. It allows us to cross-pollinate the past and present, so that inspiration can come from all angles, all ages. And if we are retro then it’s more likely the 1760s , rather than the 1960s.”

But this is no finger-in-ear trad trip, dad. Wolf People’s jams are heavy and their mauls bloody. Their music has bite. Teeth. There’s a both a ferocity and a tenderness to Ruins - and a love of volume too. These songs are as deeply embedded as the many mysterious stone monoliths that litter this country, as sharp as the scarp whose silhouette holds the form of a watching eagle, as meandering as a lowlands chalk-stream. The sole UK representatives on the Jagjaguwar roster (home to Bon Iver, Unknown Mortal Orchestra, Dinosaur Jr), Wolf People have produced a clutch of releases, including two studio albums Steeple (2010) and Fain (2013) and an alchemical compendium of oddities, curios and musical trinkets, Tidings (2010).

Split between London, Bedford and Lancashire, the quartet’s stalking territory is wide, their senses always attuned. “Our surroundings seep into our sound,” says Jack Sharp. “I’m a champion of the English countryside, particularly where I live in Bedfordshire. Landscape-wise it has little of note: it’s flat arable land punctuated by little copses and woods. But there’s a charm to it and the history is rich. It’s unique – it’s unlike anywhere I’ve been to in the world, and isn’t everywhere interesting when you dig into its past?”

Consider Wolf People as aural archaeologists then, or human sound mirrors receiving signals from the ghosts that rest in the fertile soil of Albion. Their sonic visions are Arcadian, their music joining the dots between reverie-inducing rural landscapes and the hard-riffing rock birthed in England’s industrial towns. They marry north and south, country and city, the archaic and the modern. They are Fairport Unconventional. The 13th Floor Escalators. They are Blake Sabbath.
“Not having a shared local pub or common place of residence means we draw on all sorts of physical influences,” says Hollick, “We’re not channelling urban oppression, yet have always been intent on having an English sound. When I first met Jack I was struck by someone who was writing songs that described my own childhood, even though they grew up at the other end of the country.”